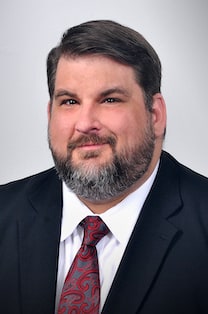 Prior to becoming an attorney, Eric worked in the insurance claims industry for 14 years. He began his career in 2005 as an adjuster and has held various positions within the industry, both as an adjuster and as a claims manager, last working for a major insurance carrier as a manager of southeast litigation. In 2013, Eric decided to begin his legal career and began law school, while continuing to work fulltime as a claim’s manager throughout.

Prior to working for Savage Villoch Law, Eric worked as an Associate for a large insurance defense firm, where he handled cases for major insurance carriers and their insureds in Florida.

Eric is married to his wife Laura. They have three children, and in their spare time they attend their children’s sporting events, have season tickets to USF football (Go Bulls!!), and enjoy spending time with their family and friends.